A shout out to immigrant parents 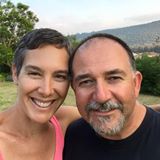 When my husband first came to the United States 21 years ago, he did not speak English and he was not an American. I would go to work in the morning, and he would stay in our rented room in a shared house and…well, I don’t really know what he did. But I do remember what he didn’t do. He didn’t answer the phone. He refused. Even now, I can conjure up that feeling of absolute annoyance. At 23, I didn’t want to miss a call. And what was the big deal???

“But then they’ll answer, and I won’t know what they said.”

I didn’t really have a response for that. I got the problem, but I was still annoyed.

Fast forward 21 years in the U.S., though his ESL classes, GED, and BFA, through the birth and raising of our three boys, through jobs at Starbucks, behind deli counters, laying tile, and then a successful design career, through becoming a part of my family, exploring the glorious nature that in my unbiased, California-girl opinion is unsurpassed anywhere on this planet (I had to get that in!), through the learning and ultimately adopting of American cultural norms, through long lines at the San Francisco INS office where we had to convince them that he “belonged”, and what do you get? A 43 year-old immigrant, now an English-speaking American, who is still homesick. Homesick for his siblings, his parents, his friends, his food, his language, his culture. He’s probably even pining for those horrible waxy napkins that don’t absorb a thing. Honestly, I do not get the point. Use your shirt. It’s a better option. JK. But not really 😉

There’s a funny thing in this world called Karma. In “American” we translate it to mean, “What comes around goes around.”

So here I sit in the library, in his country, surrounded by his language, his family, his culture, desperately searching for an English-language guidebook to help me navigate life here. Parenting is hard at home, but the ante was just upped a whole lot by having to navigate in a foreign land.

I’ve been here many, many times. I speak the language pretty darn well. (I answer the phone every time it rings.) But my blood pressure still rises every time there’s no “English” button in the top right corner of whatever website I’m exploring.

And there’s something about feeling like a helpless child when you’ve been running a family for 13 years that really gets to you after a while.

The good news is that I watched my husband succeed in a foreign land, and I do have a bit of a competitive streak in me… If he can do it, so can I.

But while I’m mustering up my courage to drive the unfamiliar roads to take the kids to a chocolate factory to escape this oppressive heat, would you please call the guy to fix the a/c? I know how to explain what’s wrong, but I’m afraid I’ll have no idea what he says about how to fix it.

P.S. If you could find me a good Mexican meal, you’d really make my day!